The Horn Of Satan 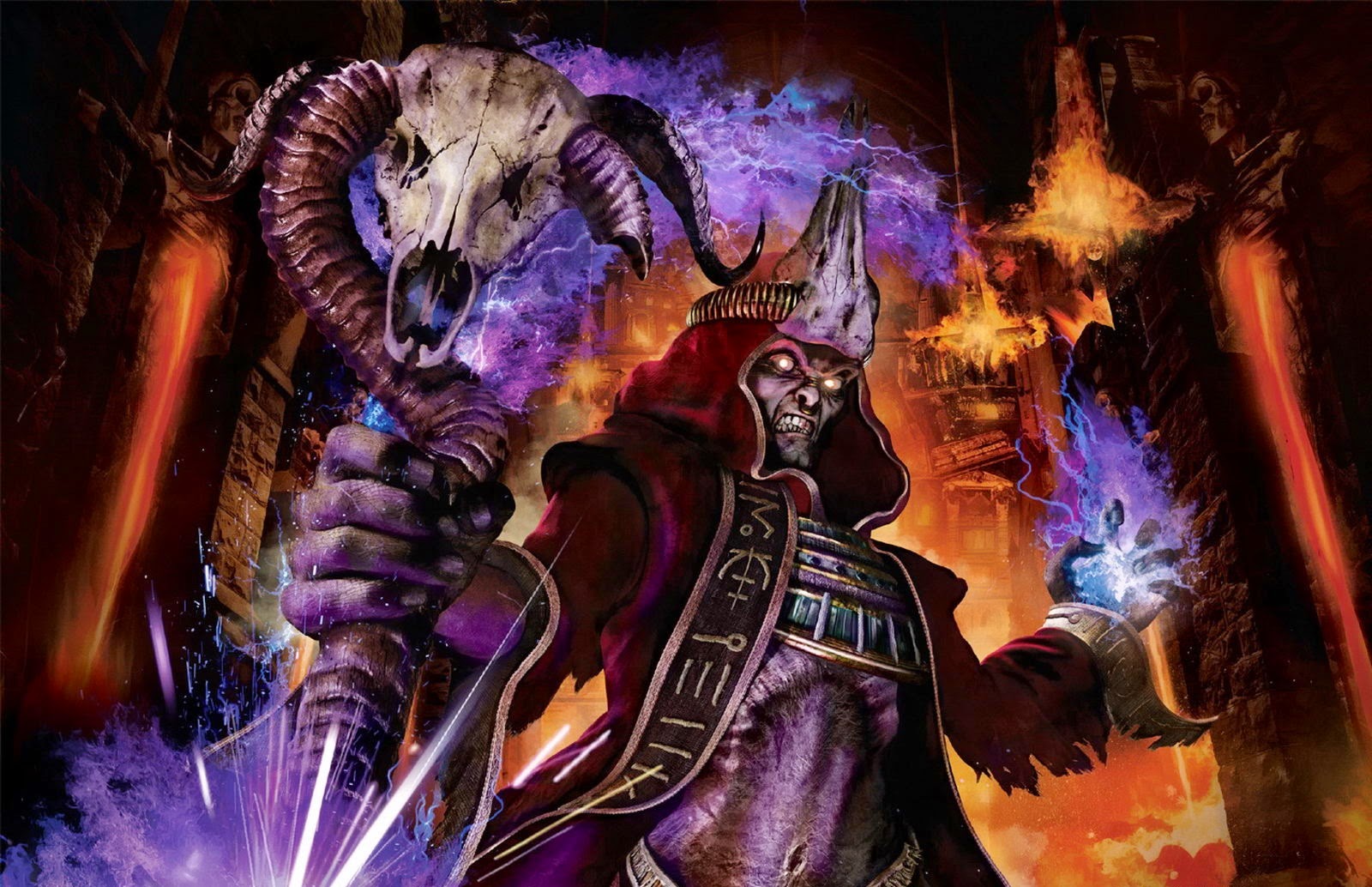 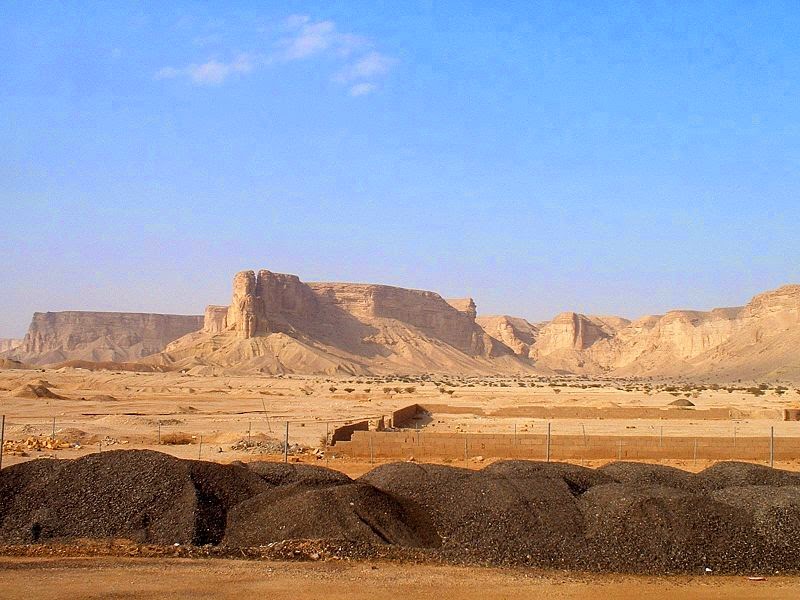 The accursed Muhammad ibn ‘Abdul-Wahhab an-Najdi is credited with founding the Salafi/Wahhabi movement whose pact with Muhammad ibn Sa'ud helped to establish the first Saudi state and began a dynastic alliance and power-sharing arrangement between their families which continues to the present day. The descendants of the heretic, the Ahl ash-Shaykh, have historically dominated the state's clerical institutions.

ibn ‘Abdul-Wahhab is generally acknowledged to have been born in 1703 into the Arab tribe of Banu Tamim in 'Uyayna, a village in the Najd region of the Saudi Arabia, the very land of fitnah, the Prophet warned against. 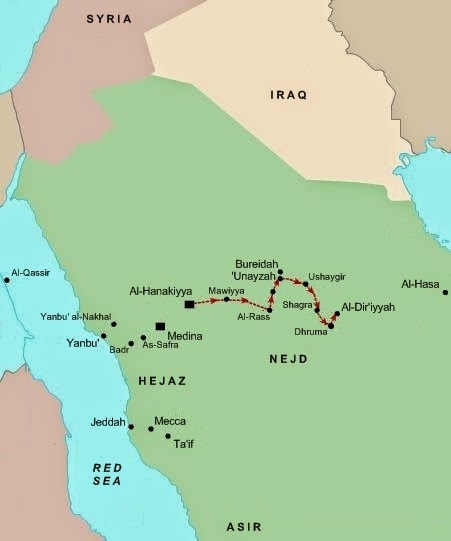 He was thought to have started studying Islam at an early age, primarily with his father, Sheikh ‘Abdul-Wahhab as his family was from a line of Hanbali scholars. ibn ‘Abdul-Wahhab was educated in Najd, Basra and Damascus.

Although, his brothers and parents were of the ‘aqidah of the Ahlus-Sunnah w'al-Jama’ah, through reading selected works of Sheikh ibn Taymiyyah, he chose to differ in belief with the rest of his family, who were not pleased with him. His brother, Sheikh Sulayman wrote a book against him called ‘Sawa’iq al-Ilahiya’, the Divine Thunderbolts, in which he refuted all his brother’s innovations and heresy. 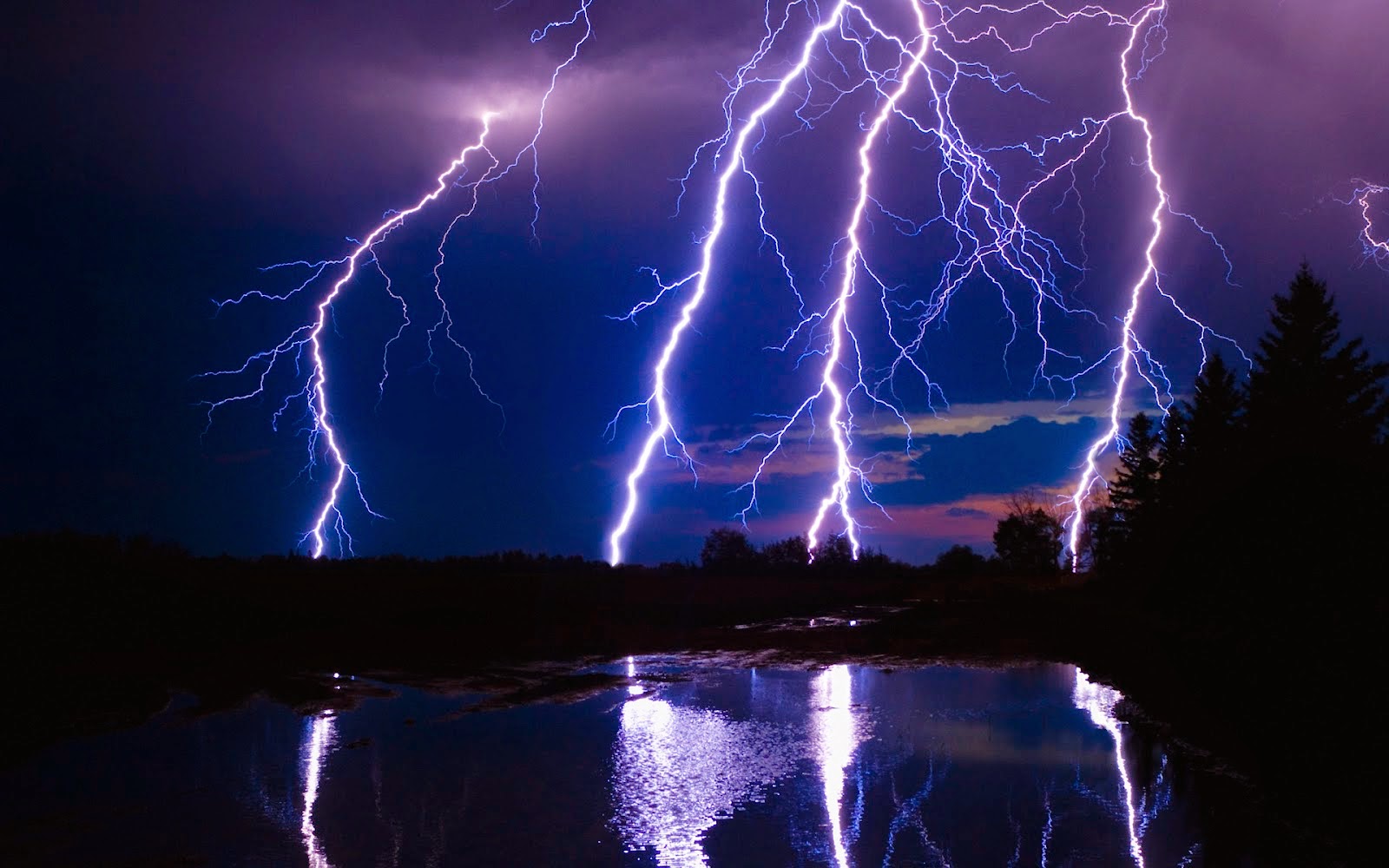 In Mecca, the Hanbali mufti, Sheikh ibn Humaydi, noted ibn ‘Abdul-Wahhab to be a poor student, and arrogant and defiant with his teachers. He was infamously known to be lacking in adab. This upset his father greatly. Consequently, ibn ‘Abdul-Wahhab did not complete his studies. It was likely he was expelled or dropped out. In Medina, he studied under Sheikh Mohammad Hayya as-Sindi. His heresies were formulated in Basra. He returned to 'Uyayna in 1740.

After his return home, ibn ‘Abdul-Wahhab began to attract and rally up followers, including the ruler of 'Uyayna, 'Uthman ibn Mu'ammar. With ibn Mu'ammar's support, ibn ‘Abdul-Wahhab began to implement some of his heresy. First, citing Islamic teachings forbidding grave worship, he persuaded Uthman ibn Mu'ammar to level the maqam of Zayd ibn al-Khattab. Secondly, he ordered that all adulterers be stoned to death, a practice that had become uncommon in the area. He personally organized the stoning of a woman who confessed that she had committed adultery. This is not in line with the teachings of the Prophet.

Muhammad ibn ‘Abdul-Wahhab considered his movement an effort to purify Islam by returning Muslims to what he believed were the original principles of the religion, as typified by the Salaf, rejecting what he regarded as corruptions introduced by bida' and shirk. In this, he was the originator of the greatest bida’, the Salafi movement.

The Wahhabi sect is named after Muhammad ibn Abdul-Wahhab. It is often believed, that ibn 'Abdul-Wahhab started the Wahhabi movement. He merely began its latest incarnation. In reality, it began in the time of Imam ‘Ali. Throughout history there have been different names for this sect, but in the eighth century, one of their leaders used to call himself Salafi. Today, this sect has many names and incarnations all over the world. 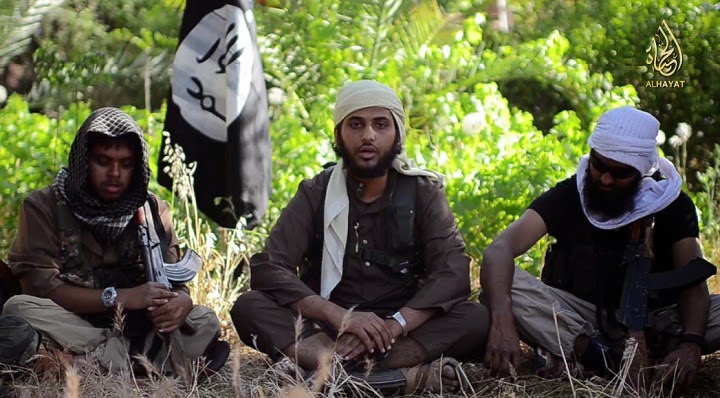 Where once they were called the Khawarij, now, they know themselves as the Salafi, the Wahhabi, the Najdi, Muhammadiyyah, the Ghayr Muqallidin and even Ahl-e-Hadith. They are not the followers of the Salaf of Muhammad since they follow a different ‘aqidah. An explanation on the differences of the ‘aqidah of the Wahhabi heresy and the ‘aqidah of the Ahlus-Sunnah w'al-Jama’ah would take an entire article or a book. It is interesting to note that the deceiving false prophet, Musaylima al-Kadhab was also born in Najd.

Hafiz ibn Kathir writes in Tarik ibn Kathir, when the kuffar of Mecca had a meeting concerning the Prophet, Satan came in the form of a Najdi elder. The old man came claiming,


“I am a Najdi. Whatever you want to know, I will be helpful.”

This Najdi sheikh then gave his view against the Prophet, throughout the meeting.

It is recorded by Imam Bukhari in Kitab al-Fitnah, the Prophet stated,


“Tribulation will emerge from the east.”


“The Horn of Satan which the Prophet referred to is you.” 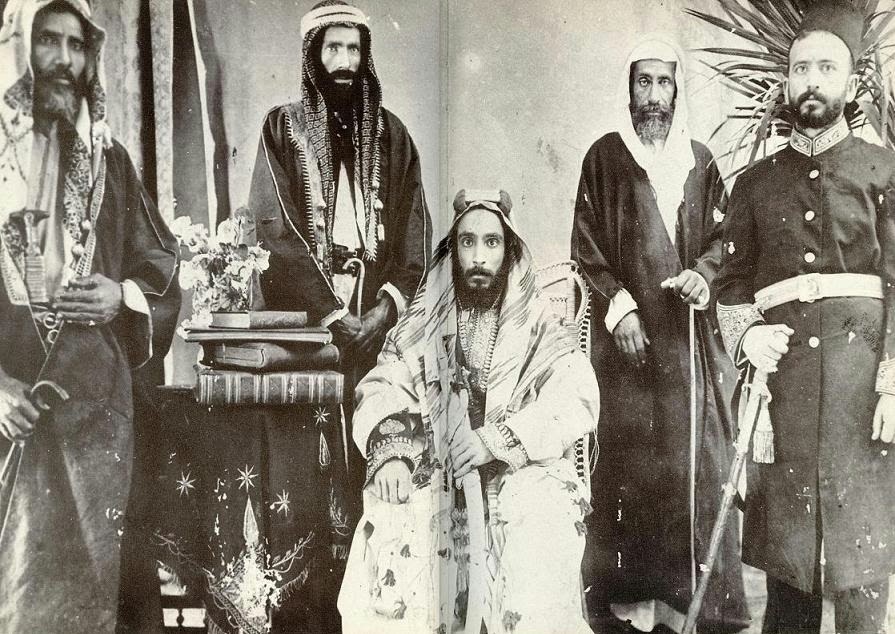 
“When I went to study in Basra, mushrikin would ask me questions and I would leave them very surprised with my answers.”


“Muhammad ibn ‘Abdul-Wahhab an-Najdi called the Ahlus-Sunnah w'al-Jama’ah kafir and mushrik apart from himself and his blind followers.”

The proof for this is he himself said that about the ‘mushrikin’ in Basra asked him questions. These people were Muslims and thus ibn ‘Abdul-Wahhab is guilty of takfir. It is the disease of the entire movement until today.

ibn ‘Abdul-Wahhab was quoted in Kashf ash-Shubhat that people who ask for intercession from the Prophet and make du’a through the wasila of awliya’ to get closer to Allah are guilty of shirk. Thus, it is permitted to kill them and to take their possessions. Sheikh Attar wrote that the Najdi heretic said,


“I declare war on these people as the Prophet declared war on the kuffar of Mecca, against those people with corrupt beliefs.”

This is found in ‘Muhammad bin Abdul Wahhab’, page 55. 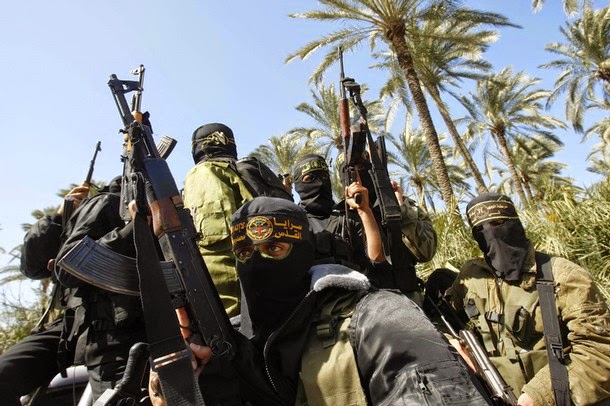 Just like the Khawarij, he considered all other Muslims to be kafir. The Khawarij were people who considered all other Muslims to be kafir. They believed any person who has committed a major sin was a non-believer. They called the Sahabah kafir and killed or tried to kill them, as they did with ‘Uthman, Talah, Muaviye and Zubayr. They killed ‘Ali. The Khawarij only took the literal meaning, zahir, of the Qur’an. This is also the trait of the Wahhabi.

The greatest crime of the Wahhabi ilk is their attack on the Prophet Muhammad in their supposed defense of Islam. The following is adapted from Khulasah al-Kalam fi Bayan al-Umara w'al-Balad al-Haram, by Imam Ahmad ibn Zayni ad-Dahlan al-Makki ash-Shafi’i. The sheikh passed away on 1304 AH / 1886 CE.


ibn ‘Abdul-Wahhab used to insult the Holy Prophet Muhammad Mustafa in various ways because he believed that this was the best method to safeguard his flawed interpretation of tawhid. The following are a few examples of his appalling disrespect and insolence towards the exalted personhood of the Holy Prophet:

He referred to the Holy Prophet as ‘tarish’, which in Najdi speech means a lowly messenger boy or a mere postman.

He used to say that the incident at Hudaybiyyah is full of lies and rejected the bay’ah. Hence, when his followers and acolytes used to speak against the incident, he felt pleased with them.

One of his blind followers once remarked in his presence that his walking stick is better than Muhammad because his stick can still be used for killing a snake or such reptiles whereas Muhammad is not in any way beneficial anymore. He was just a postman who is dead.
That follower is blind in dunya and akhirah. 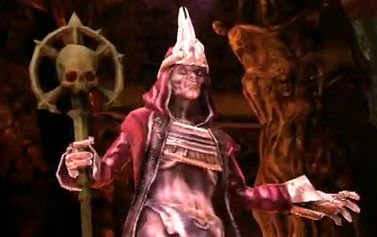 He used to often say that recitation of salawat from the minarets of the mosques is by far a graver sin than a prostitute playing musical instruments in her brothel. He used to tell his followers that this will protect monotheism. Clearly this was a man who did not love the Prophet and worshiped his nafs. 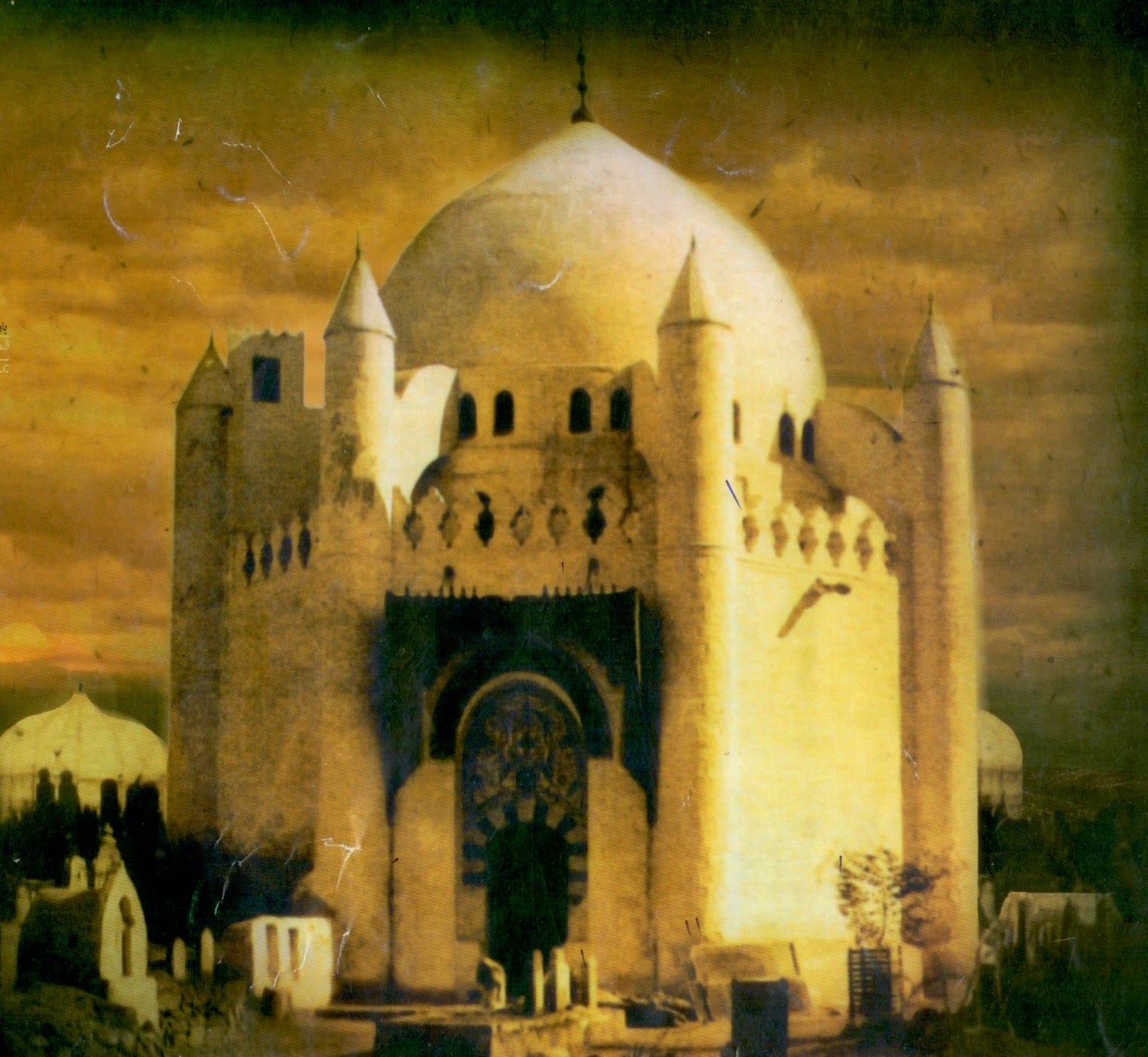 He destroyed the Dala'ilul-Khayrat and many other valuable books of salawat by setting them ablaze. His followers trampled the unburnt portions underfoot, notwithstanding the fact they held the Names of Allah and His Messenger.

He also destroyed the books of fiqh, ahadith and tafsir penned by renowned and authentic Muslim scholars of the Ahlus-Sunnah w'al-Jama’ah. These included the works of eminent theologians such as the likes of Imam Ghazali and Sheikh ‘Abdul-Qadir Jilani among many others. 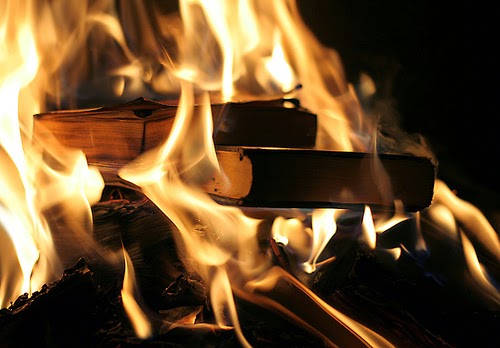 He allowed his companions to interpret the verses of Qur'an as per their whims and fancies always taking the literal approach, going so far as to ascribe anthropomorphic qualities to Allah.

He used to ascribe to Muslims Verses of the Qur’an revealed about the munafiqin and the mushrikin. The Khawarij also followed the same modus operandi. In effect, they were the Khawarij reborn.

ibn ‘Abdul-Wahhab used to instruct his officers to do ijtihad in matters of religion and issue the ahkam of sharia according to their personal opinion without regard to the precedence of the pious predecessors. He also stopped them from referring to religious books saying that these contain mixtures of right and wrong both. As a matter of fact, all his officers were absolutely ignorant of religious laws. The ignorance of the inner dimensions of Islam is the hallmark of the movement.

Those scholars and pious people who did not embrace his newly-innovated religion were immediately put to sword. He is a brutal murderer and a thief, desecrator of the maqam of the sahabah and awliya’. His followers attacked Mecca and Medina and almost burnt the Kaaba. They killed hundreds of pilgrims and desecrated Masjid an-Nabawi. Whatever booty he recovered after looting Muslims was distributed as zakat to his followers. 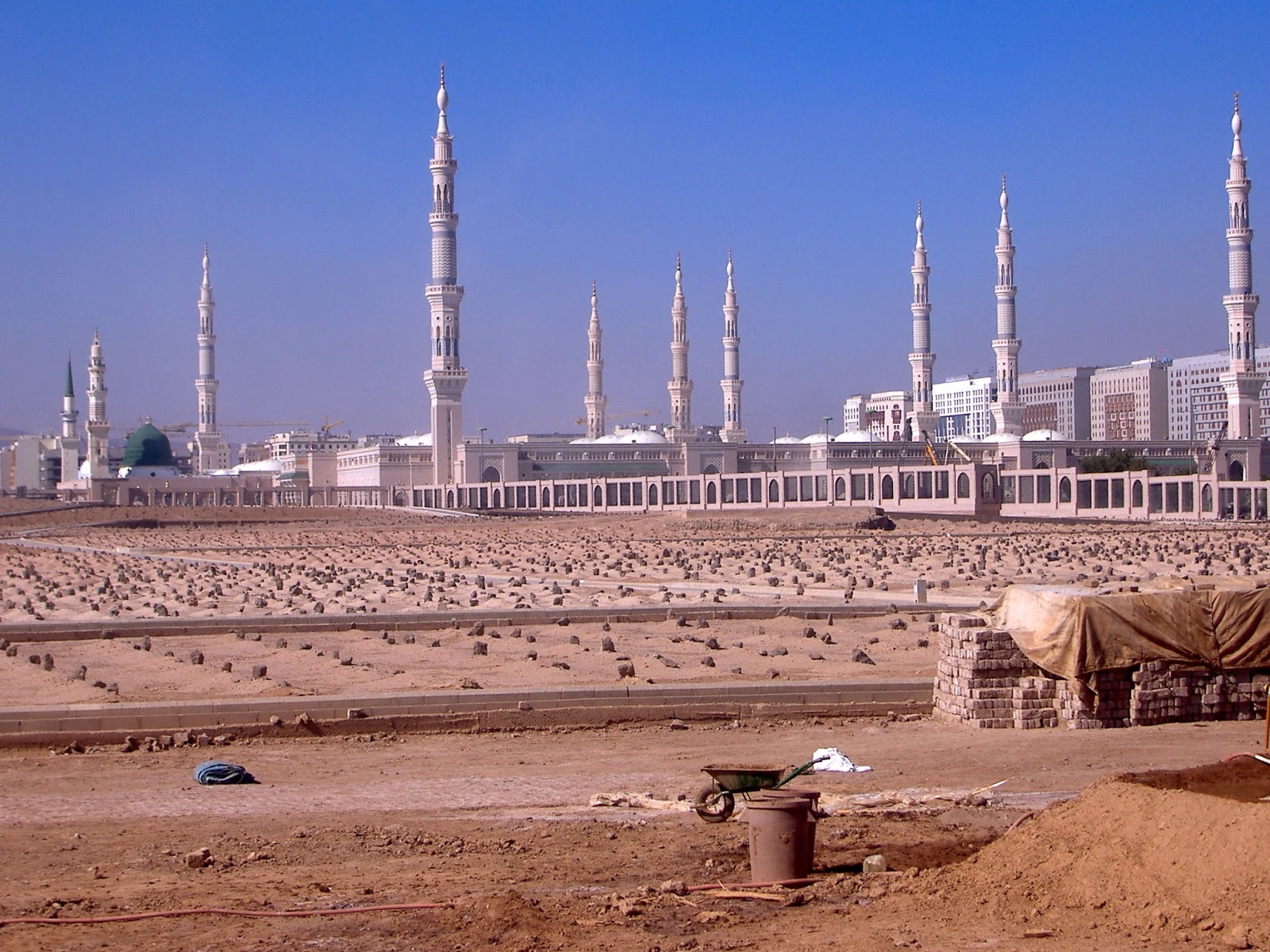 The followers of Muhammad ibn ‘Abdul-Wahhab do not follow any of the madhahib of fiqh or ‘aqidah. They pride themselves in being called as Ghayr Muqallidin. To deceive foolish Muslims, they claim to follow the Hanbali madhhab.

He used to instruct people against supplications after salah, justifying it by asking,
“Do you expect wages of worship from Allah?”
This, from a man who knows nothing of Allah!

In short, he is the enemy of Allah and His Messenger. Were it not for the fact that his followers control the Haramayn, they would be considered apostates of Islam. As it is, they have declared war on the Ahlus-Sunnah w'al-Jama’ah and the awliya’.

Abu Hurayrah narrated that the Prophet relayed in a hadith qudsi that Allah said,


Whoever harms any of My Deputies, I shall declare war on him.
The striving of My servant to please Me does not receive any Reward greater than that of fulfilling what I have commanded him to do. My servant volunteers in his perseverance, offering supererogatory devotion to please Me and to earn My Love.
Once I cast over My Divine Love upon the servant, I become the very hearing with which he hears, sight with which he sees, hand with which he exacts justice, and feet that carries him.
Should My servant pray for something he needs, I will answer his prayers and should he seek refuge in Me, I will protect him.
Indeed, there is nothing that I have decreed, which I hesitate to do for the sake of a believer except causing him to experience death. He dislikes it, and I hate to displease him, but I have thus ordained. 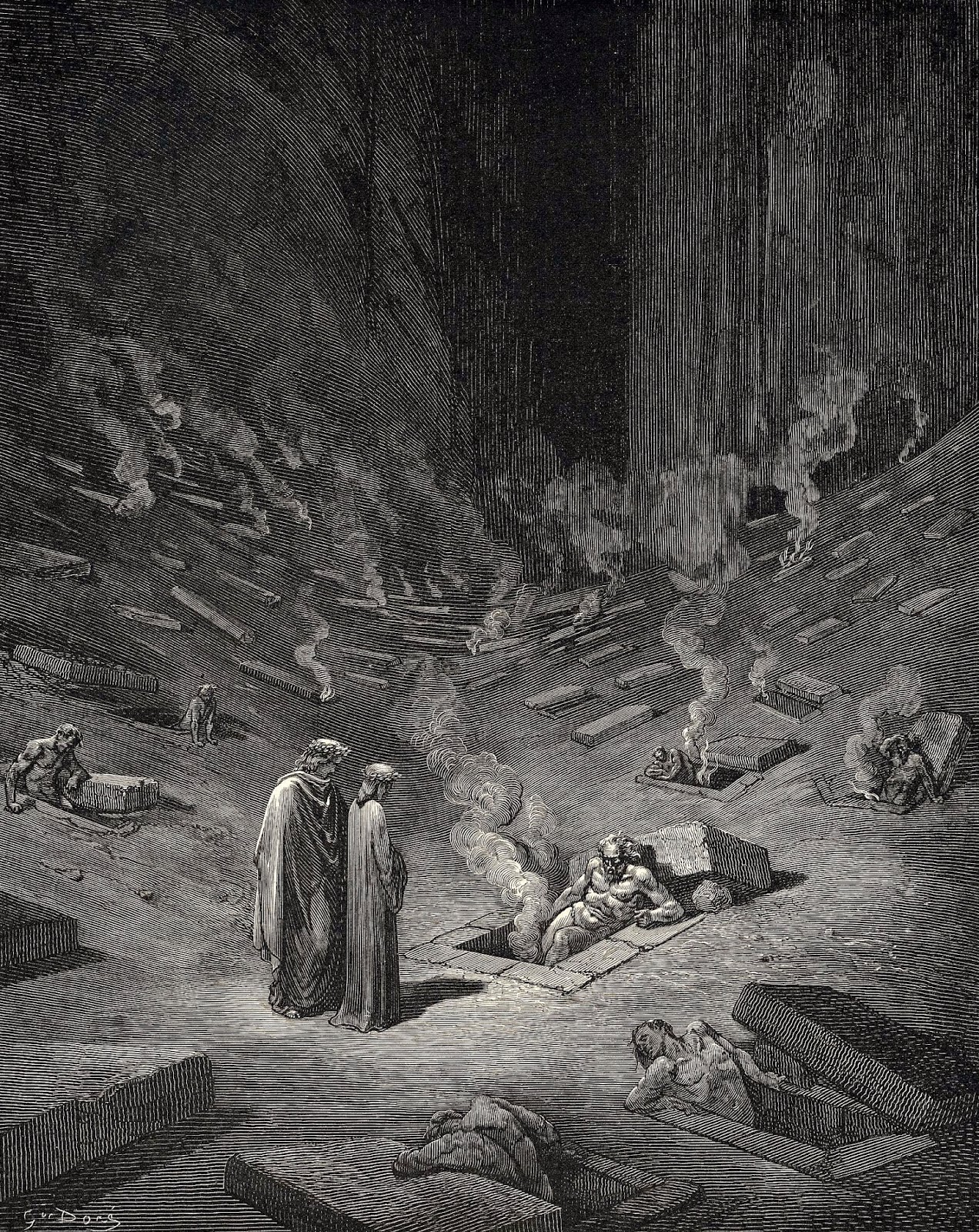 — Sidi Terence Helikaon Nunis of A Muslim Convert Once More
Posted by Unknown at 4:00 PM